The 2023 float theme is “Protecting the Wild,” for our new series of the same name. The 55-foot float pays tribute to conservation success stories of some of the nation’s most endangered species.

Highlighted are the stars of Mutual of Omaha’s Wild Kingdom Protecting the Wild’s premiere episode, two black bear cub brothers released back to the wild after being injured and rehabilitated following a wildfire. The bears are portrayed in their Pacific Northwest home with multiple furry friends, including black-footed ferrets, beavers, wolves and a mountain lion perched on a floral cover rock shelf. A cascading waterfall is surrounded by two, towering 23-foot-high ponderosa pine trees that play host to visiting California condors.

The series honored the bear cubs by donating trees in the forest to restore wildlife, air and water quality where the bear cubs were found and still call home.

Just as he leads viewers in our new wild adventure, Wild Kingdom Host Peter Gros will be seated on the float to guide spectators to the wonders of the Wild Kingdom. 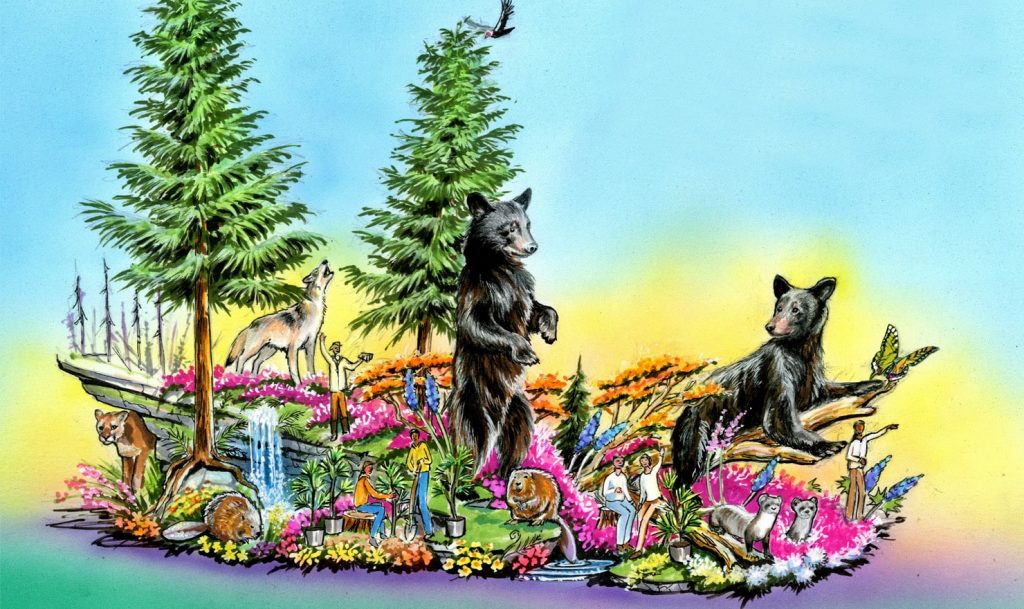 Our float is a showstopper you won’t want to miss! Here’s a sneak peek at some of the details:

About the Rose Parade

Last year, our “Wild Kingdom” float earned the parade’s Director award for the most outstanding artistic design and use of floral and non-floral materials. The conservation-themed float was made of completely organic material.

Join us for the premiere of Mutual of Omaha’s Wild Kingdom Protecting the Wild, immediately following the Rose Parade on RFD-TV and digital channels. Bookmark this page to watch all the episodes as they premiere. And while we eagerly await the premiere, take a look at these progress pictures of our float from November 1, 2022.