Each year, hypothermic, young sea turtles are stranded on coastal shores in the late fall and early winter. Thanks to the efforts of numerous organizations, these sea turtles are rescued from cold stunning and returned to warmer waters, even during the holidays as seen in 2020 with an extraordinary Thanksgiving rescue.

What is turtle cold stunning?

Sea turtles migrate throughout the year, heading north in the summer and back south for the winter. But the hooked peninsula of Cape Cod, Massachusetts, proves a challenge for these marine animals who often get stuck just as water temperatures drop into the low 50s.

When the water drops below 50, sea turtles experience cold stunning, which renders them weak, lethargic and hypothermic. Sea turtles are cold-blooded animals, meaning their body temperature stays the same as the surrounding water temperature. Eventually, the wind will wash them ashore but they’re often in bad condition at this time. 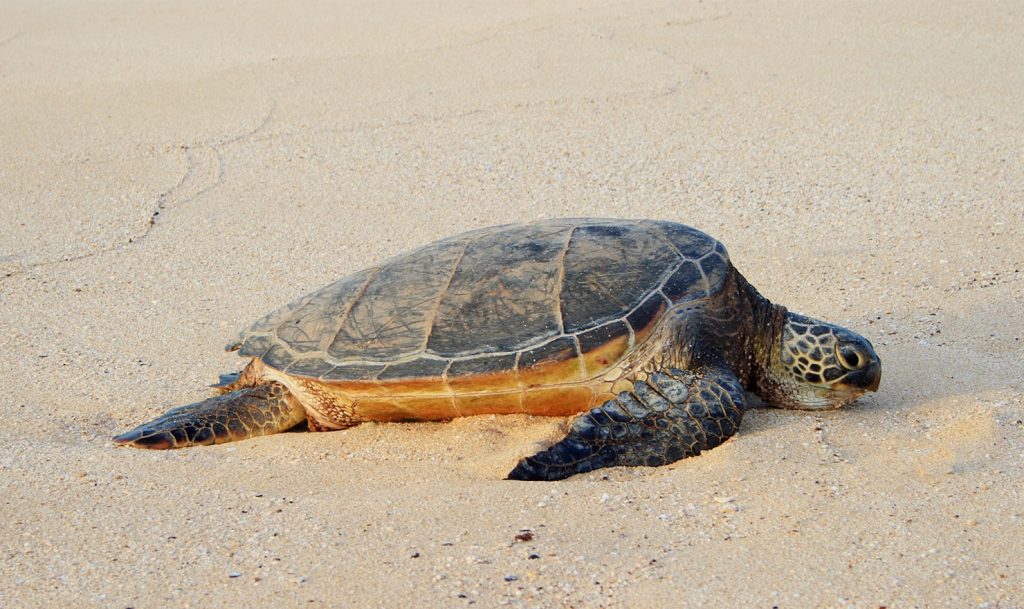 While cold stunned, the turtles will often have gone for weeks or months without food. Their body temperatures may reach 30 or 40 degrees, 20 degrees lower than they should be.

Cold stunning has been documented in the U.S. since the late 1800s, but the frequency and number of turtles that experience it has greatly increased over time. Thankfully, the U.S. has a number of rescue organizations, wildlife agencies, rehabilitation facilities and volunteers who are ready each season to help the stranded turtles. 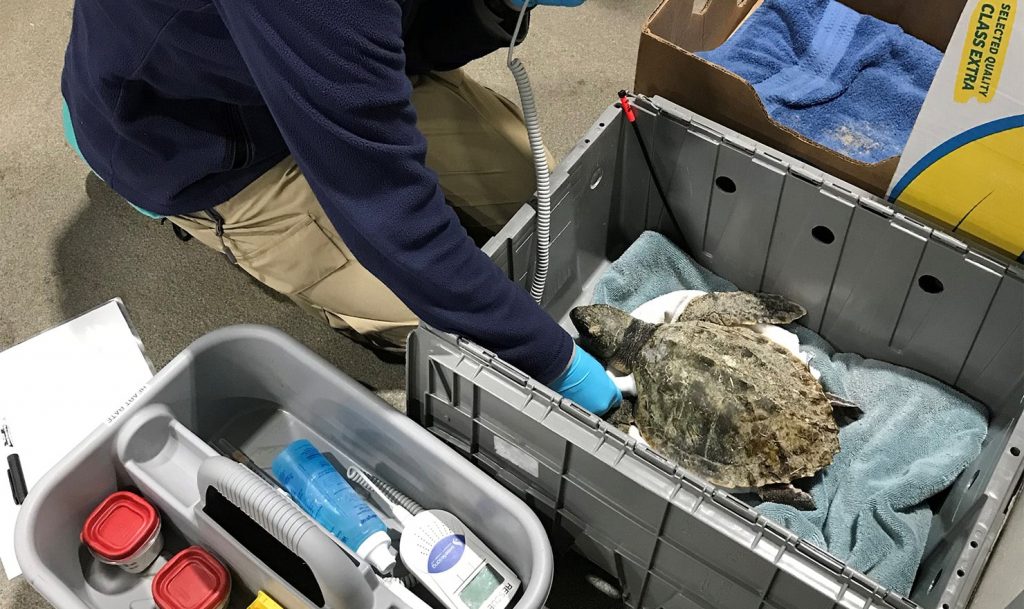 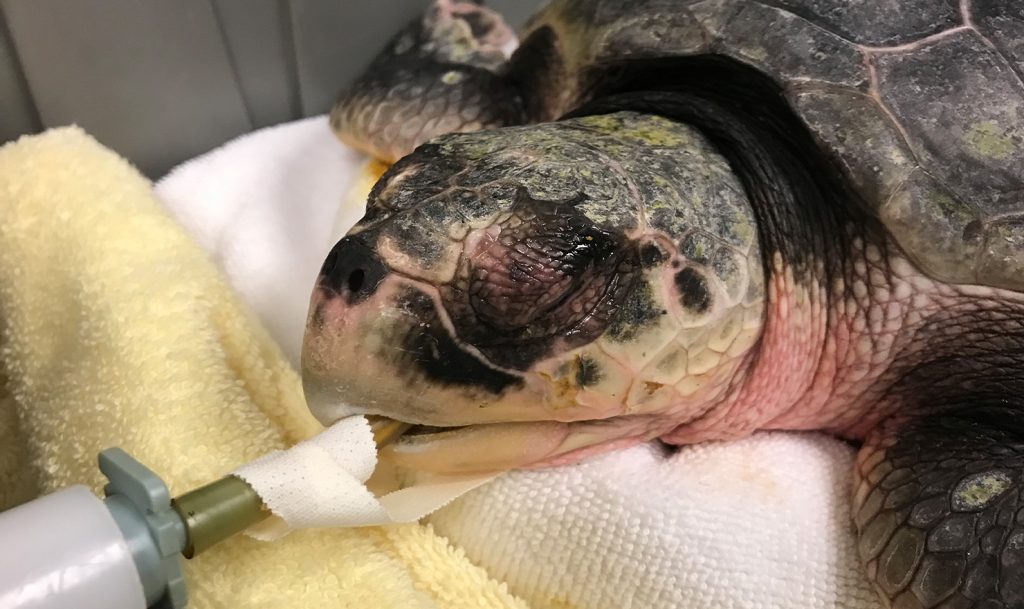 In Cape Cod, Mass Audubon Wellfleet Bay Wildlife Sanctuary scours the beaches for any stranded ocean animals. Once spotted, the sea turtles are transported to the New England Aquarium’s Sea Turtle Hospital in Quincy, Massachusetts. There they receive treatment, and their temperatures are closely monitored. The turtles are warmed up 10 degrees every 24 hours in the hospital’s holding tanks. The hospital along with secondary rehabilitation facilities release most of the turtles in their care back into the wild (the very small number of turtles that cannot be released stay in human care).

One incredible story of sea turtle rescue happened during Thanksgiving weekend of 2020. Hundreds of cold-stunned turtles washed up on Cape Cod beaches in critical condition. Massachusetts Audubon’s Wellfleet Bay Wildlife Sanctuary rescued turtles, including 30 Kemp’s ridleys and took them to the Sea Turtle Hospital and the National Marine Life Center. Once there, they were stabilized before being flown to secondary rehabilitation facilities along the East Coast and Gulf of Mexico to continue treatment. 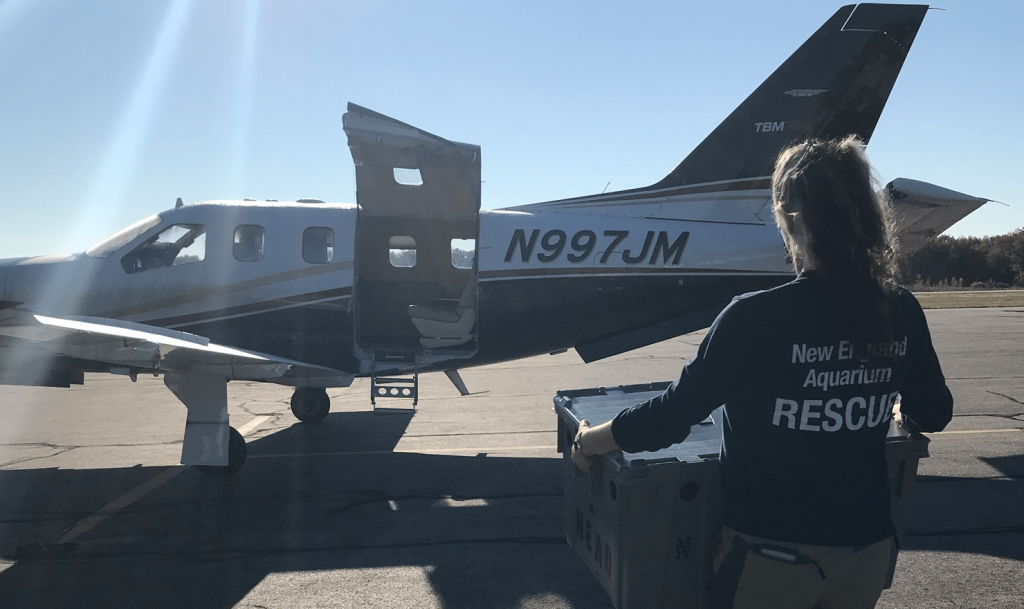 The turtles were on a flight with Turtles Fly Too, an organization of pilots who volunteer their airplanes to transport the turtles to receive care. This Thanksgiving-week trip was anything but smooth sailing due to strong winds and storms en route. Pilots slowed their journey which caused them to change their route and stop to refuel twice.

One of the refueling stops was in Chattanooga, Tennessee, where a rock kicked up and damaged the plane’s propeller. The plane needed repairs and couldn’t make the rest of the flight. So, the team took action with 20 staff from Turtles Fly Too, NOAA Fisheries and the New England Aquarium rallying around the clock to find emergency overnight housing as soon as possible for the turtles. The Tennessee Aquarium saved the day, driving the turtles to an offsite facility. But the turtles still needed to make their way to New Orleans. 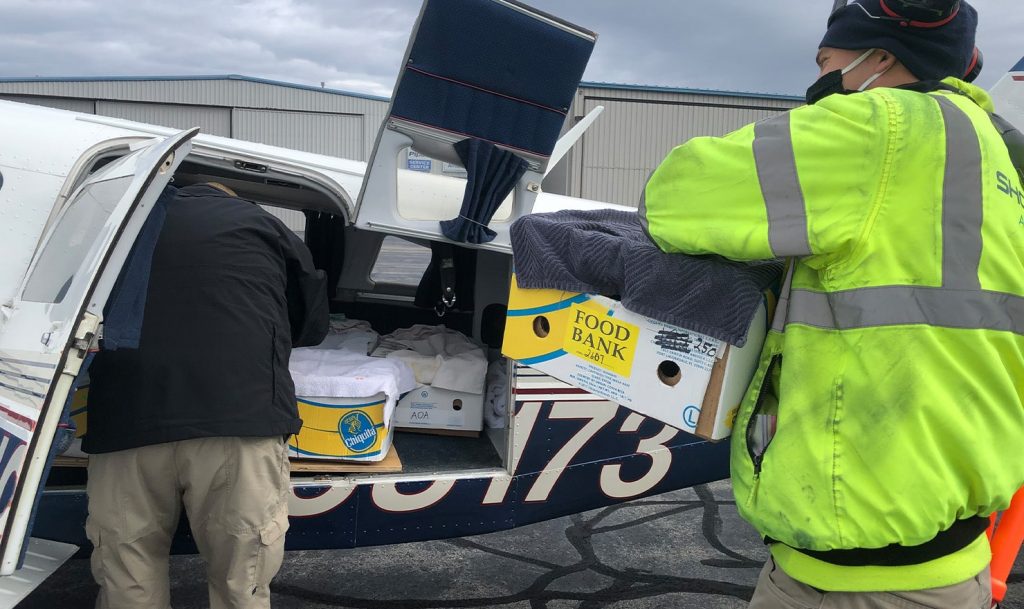 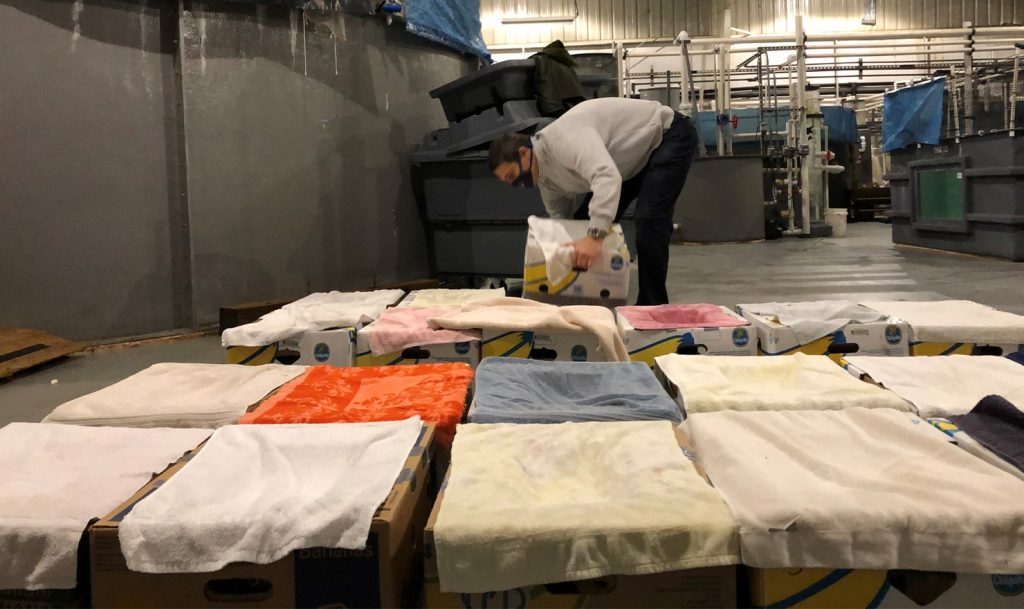 Thanksgiving afternoon, staff loaded the turtles into a passenger shuttle loaned by the Chattanooga Airport, with pilots from Turtles Fly Too in the driver’s seat. They made it halfway before transferring the turtles to staff from CWN who continued the turtles’ journey to New Orleans. Once they arrived in the Big Easy, the turtles had many months of rehabilitation before being released back into the wild.

Another incredible rescue story happened this winter when a sea turtle was rescued on Cape Cod after ingesting a balloon ribbon. Like the Thanksgiving crew, this turtle was also a Kemp’s ridley turtle.

The sea turtle had a long balloon ribbon, extending from outside its beak, through its digestive track and out its posterior opening. According to the New England Aquarium, part of the balloon was still attached to the end of the ribbon, already having passed through the turtle’s gastrointestinal tract.

After rescue, it was transported to the Sea Turtle Hospital where it was found hypothermic, dehydrated and anemic. The ribbon proved an extra challenge as it can cause bunching of the intestine. The turtle needed surgery to remove the ribbon, but first it needed to be stabilized to survive general anesthesia. Eight days after rescue, the turtle experienced a successful operation to remove the balloon ribbon which was more than seven feet long. According to research from the University of Queensland, more than half of sea turtles worldwide have ingested plastic or other marine debris, greatly affecting our ocean animals and ecosystems.

New England’s Sea Turtle Hospital has seen a greater number of stranded turtles over the last decade due to warming ocean waters. Turtles travel in the Gulf Stream of Maine, the fastest warming body of water in the world. They are unimpeded by the cold water west into the Cape Cod Bay until they’re stuck in the bay’s hook when temperatures begin to drop. 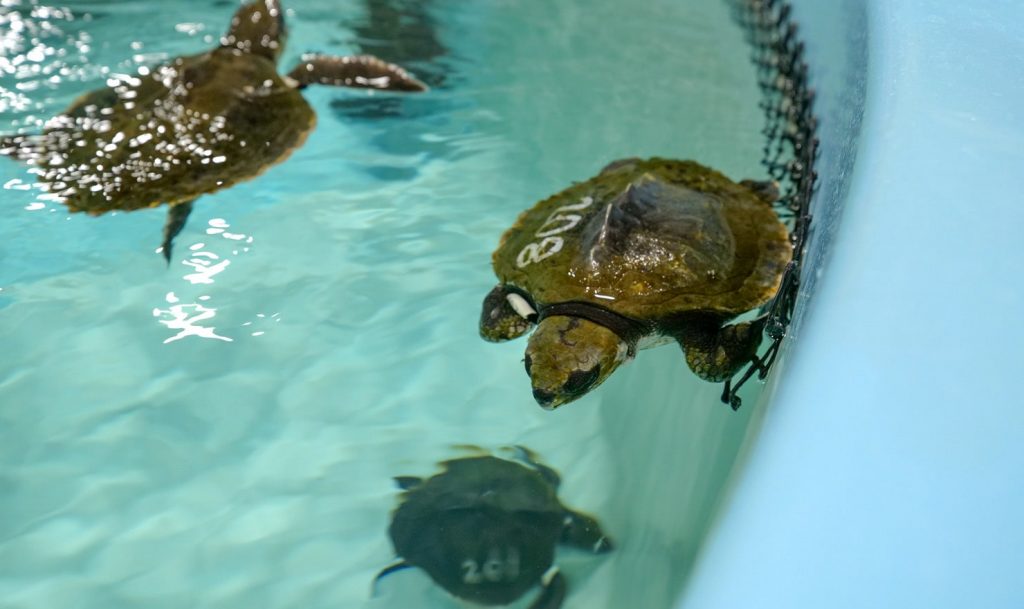 Sea turtles are one of the featured animals in Mutual of Omaha’s Wild Kingdom Protecting the Wild. Catch “Return of the Turtles and Manatees” when it airs on March 24. Get a sneak peek of the episode today. And, learn from Host Peter Gros how you can help protect turtle and tortoise habitats.