The latest episode of Mutual of Omaha’s Wild Kingdom Protecting the Wild took the crew to Florida to learn about manatees and sea turtles. These species have long called the Sunshine State home and will continue to thanks to efforts from rescue organizations and attentive Floridians. Get a glimpse of the episode, which will air in 2023.

The slow-moving Florida manatee can be found in both coastal and inland waterways throughout the state. Various threats such as habitat loss, boating collisions and diminishing food sources have plagued manatees throughout Florida. 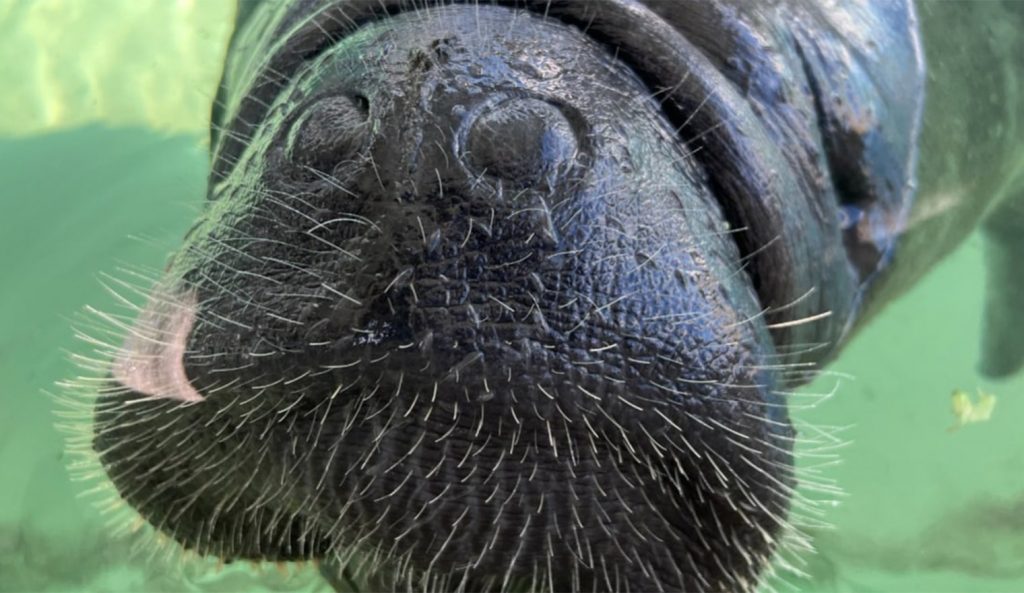 Since late 2020, Florida has declared an Unusual Mortality Event (UME) for manatees due a dramatic decline in available food. The Wild Kingdom crew traveled to the Indian River Lagoon where manatees suffer from chronic malnutrition because of a short supply of seagrass. 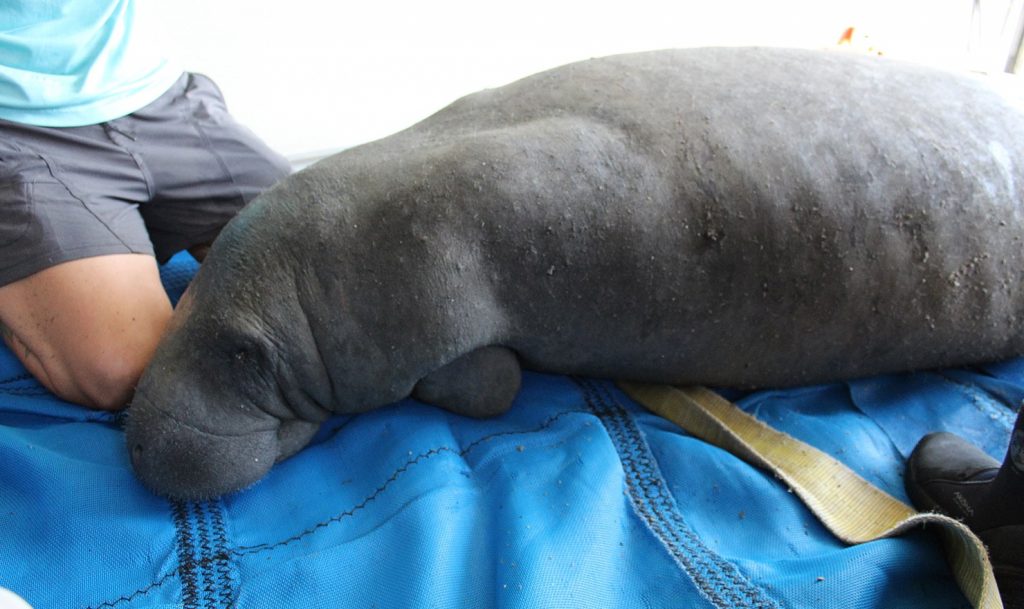 Matthew the manatee right after he was rescued.

One manatee affected by the UME was Matthew, who was first rescued as orphan in 2016. He was initially released but rescued again in 2021 after he struggled to find food. Matthew was feeding on macro algae until the plant totally died off in 2020. After rehabilitation, Matthew was released in Blue Spring State Park in early 2022. Wild Kingdom Host Peter Gros joined Monica Ross, Clearwater Marine Aquarium senior research scientist, on the St. John’s River near Blue Spring State Park in Orange City to search for Matthew.

Manatees released into the St. John’s River have an abundant supply of various plant life to eat. These include surface plants, such as duck weed and alligator grass, which manatees learn to eat while in rehabilitation. 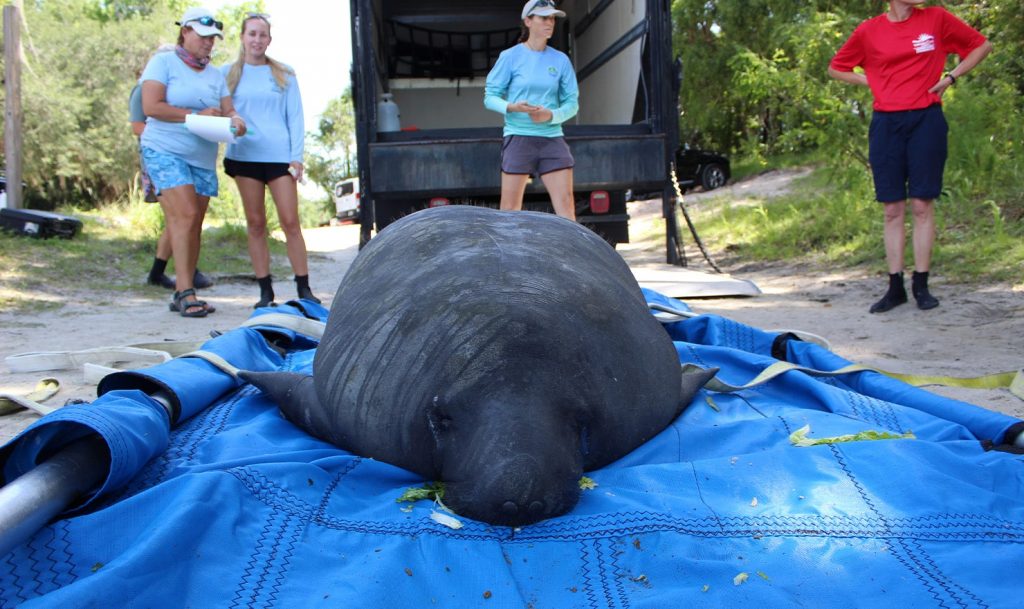 Matthew is now healthy and ready to be released back into the wild.

Researchers use a sonic transmitter to listen for the presence of manatees in the St. John’s River. The river is only two to three feet deep in some places with a soft, muddy bottom so even if a manatee is nearby, it may not be visible. This is one of the reasons they are prone to boat strikes, as even in shallow waters they can’t be seen.

The Wild Kingdom crew also met Inigo, a manatee rescued by Jacksonville Zoo and Gardens. He was rescued in December 2021 and required around-the-clock care for his first three weeks at the zoo. To help keep him buoyant in the zoo’s pool, the care team strapped life jackets around his body and tied pool noodles into a circle with rope. Inigo was too weak to hold his own tail up. 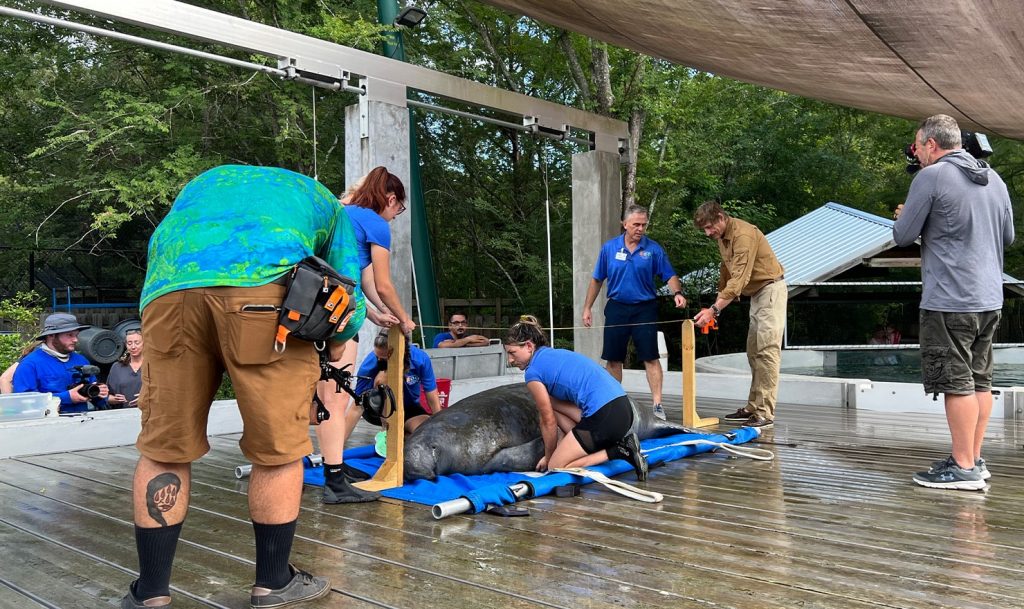 Inigo’s vet workup to ensure he’s healthy enough to be released back into the wild.

To prepare for his release, Inigo was stabilized by the zoo’s team and Peter. Then Nadia Gordon, marine mammal biologist for the Florida Fish and Wildlife Conservation Commission, placed a passive integrated transponder (PIT tag) under Inigo’s skin. The tag is about the size of a grain of rice and similar to a microchip used for pets. This helps researchers identify him when he’s back in the wild and monitor his success to ensure he’s doing well on his own. 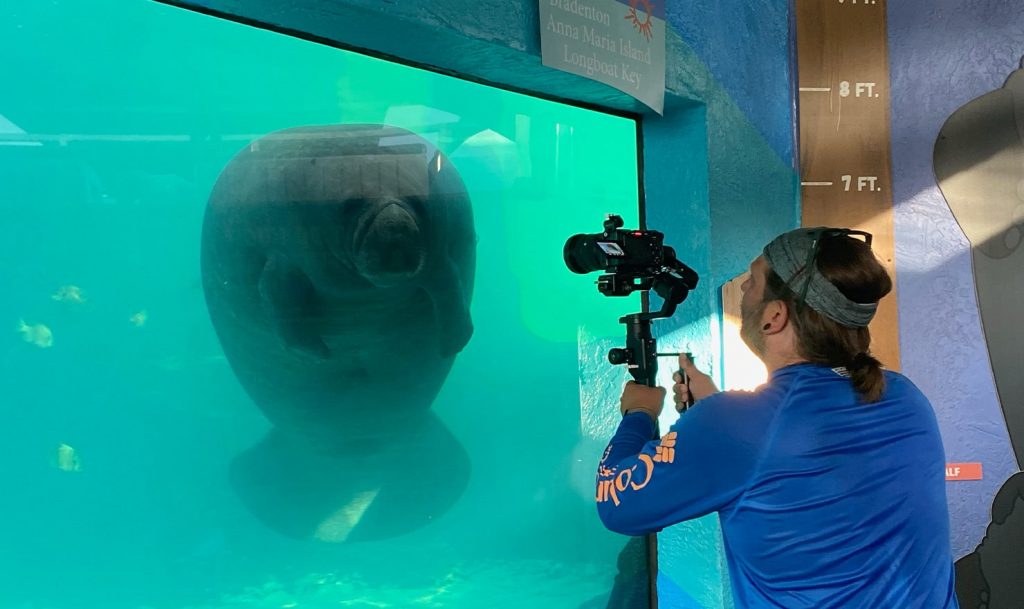 Although sea turtles can be found in temperate and tropical oceans worldwide, Florida is a special place to the species. It’s home to many sea turtle nesting and feeding sites. The Wild Kingdom crew traveled to Florida’s west coast to see sea turtles in the wild and in rehabilitation at Mote Marine Laboratory & Aquarium. 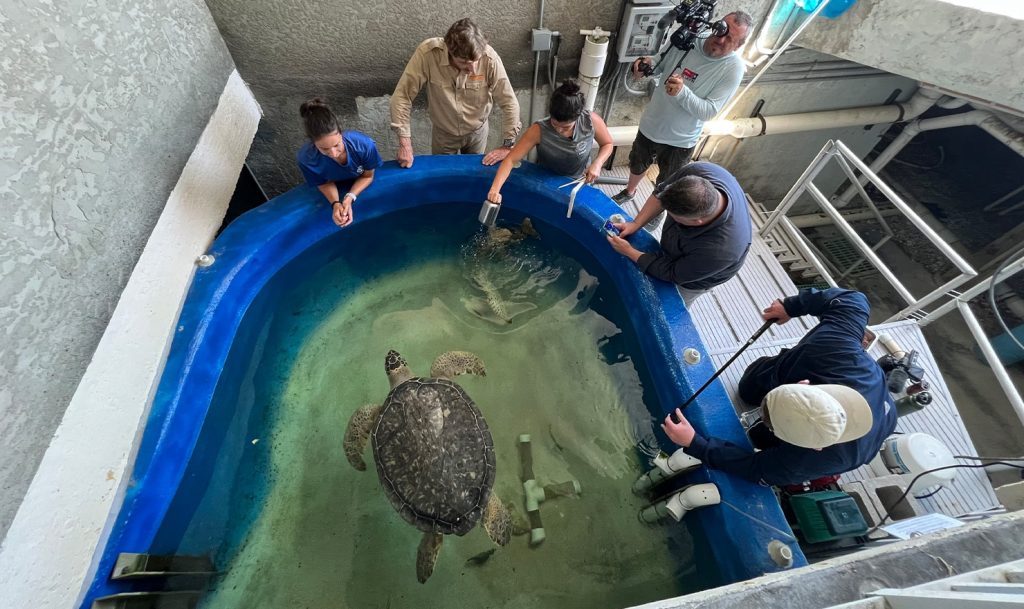 Mote Marine Laboratory & Aquarium in Sarasota, treats an average of 1,000 sea turtle hatchlings per year, of which 85% are released back into the wild. Sarasota county is home to the highest dentistry of loggerhead turtle nesting on Florida’s gulf coast. 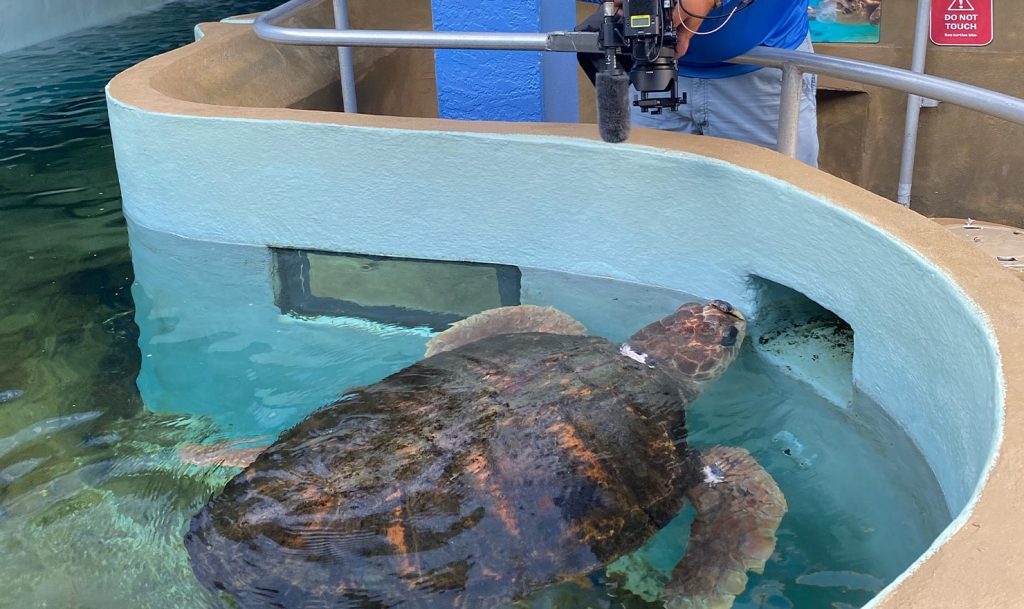 One of the most famous turtles at the aquarium is Montego, a 45-year-old loggerhead. She was hatched in captivity and participated in sound and behavior studies at the University of North Carolina before coming to the aquarium.

Our crew also visited Longboat Key Beach with Melissa Macksey, senior biologist and conservation manager at Mote. Macksey showed us how to determine a loggerhead turtle recently visited the beach by looking at the size and shape of tracks in the sand. 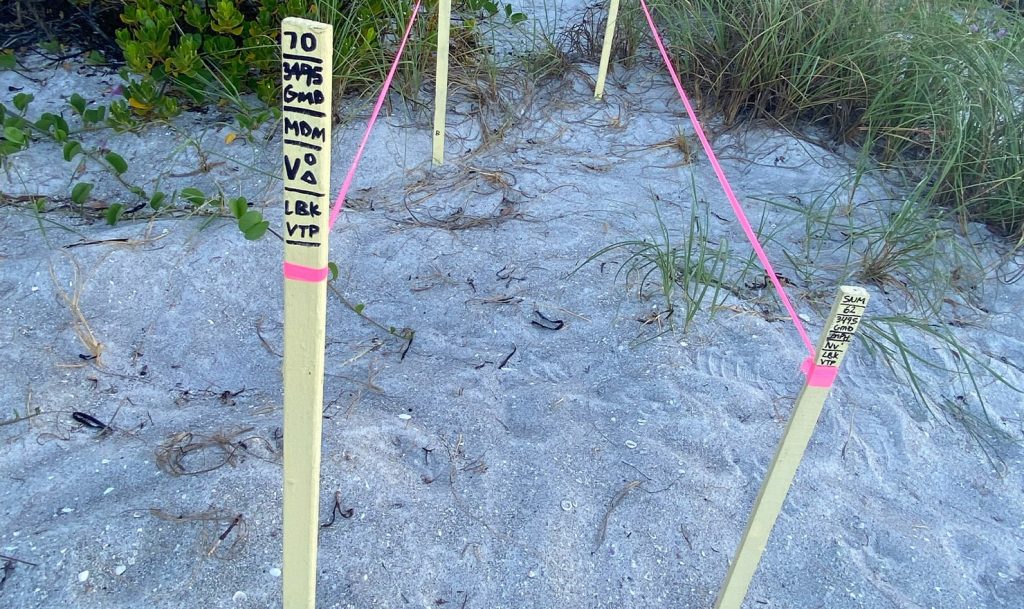 Along the beach stakes and pink flags mark nest sites so the public is aware of where they are. Special markings indicate GPS measurements and distance to the water. The aquarium has monitored nests for 41 years and observes 35 miles of beaches during nesting season from May to October. Mote has documented 3,500 nests from Longboat Key Beach to Venice, Florida.

The Wild Kingdom crew witnessed sea turtle rehabilitation and release in action by meeting Sid. Sid was rescued in New England and flown to Florida by Turtles Fly Too, a group of pilots who volunteer with marine life rescue. We met Sid while he was rehabilitating at the Florida Aquarium Turtle Rehabilitation Center in Apollo Beach. The center has a deep dive foraging pool which allows the sea turtles to practice foraging for food before their release into the wild. 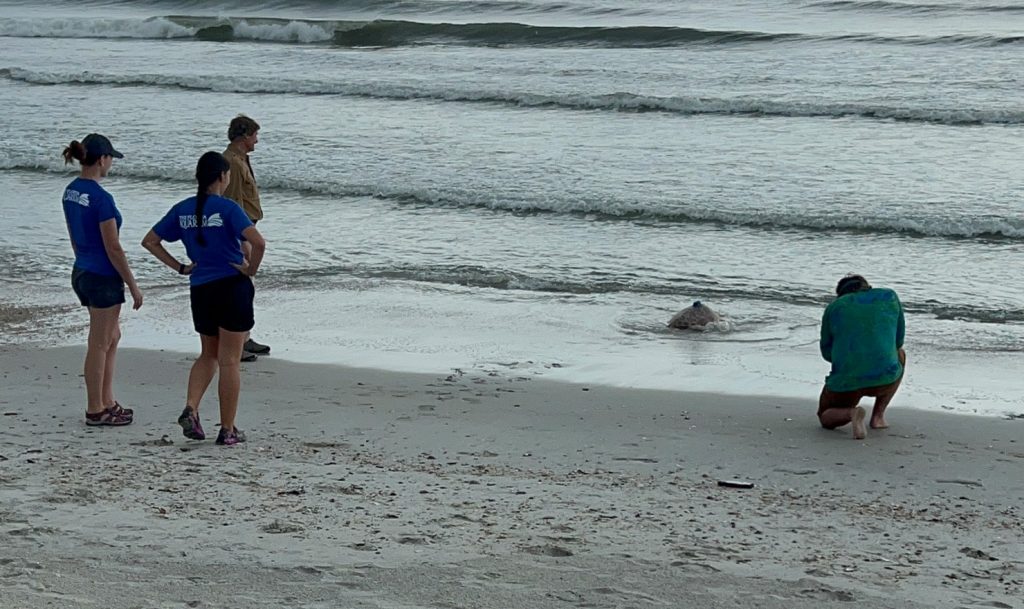 Sid the sea turtle heads back to sea after being rehabilitated.

Sid was cold stunned when rescued, which means a turtle he was weak from exposure to cold temperatures. Sid also had a bone infection in his flippers. The rehab team used laser therapy and antibiotics to help heal the infection. 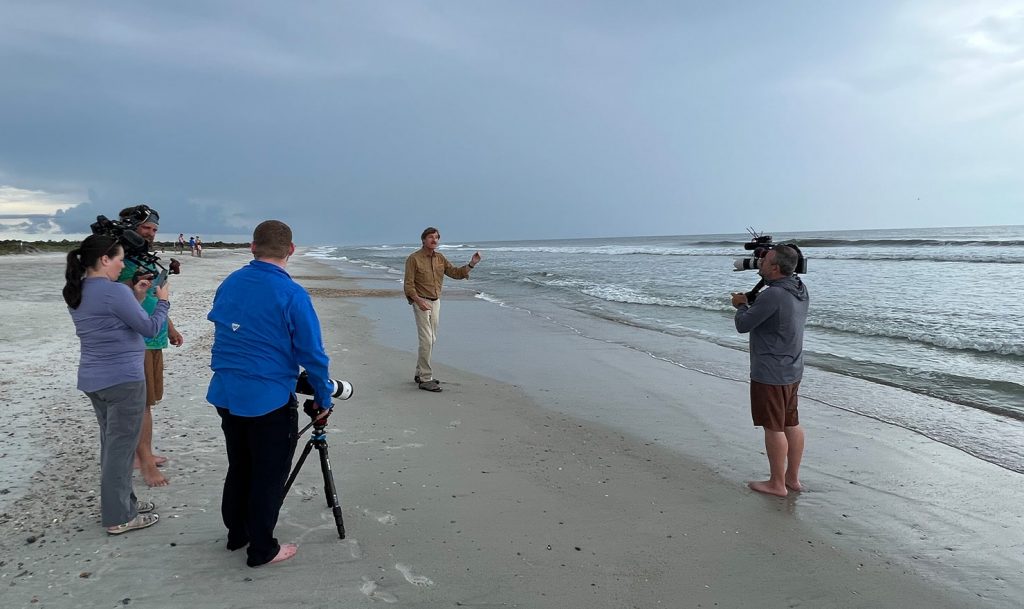 Sid spent around seven months in the Florida Aquarium’s care. The Wild Kingdom crew was able to see his release back into the wild at Little Talbot Island State Park near Jacksonville. Sid was the 13th release of the year for the aquarium, which has released more than 200 rehabilitated sea turtles back into the wild.

Click here for more behind the scenes looks at Mutual of Omaha’s Wild Kingdom Protecting the Wild.