The black-footed ferret, thought to be extinct, was rediscovered in the 1980s. Today they have been given a second chance at survival thanks to conservation efforts. Mutual of Omaha’s Wild Kingdom Protecting the Wild film crew traveled to Colorado and Wyoming to learn the tale of the black-footed ferret and its amazing comeback story.

The remarkable return of the black-footed ferret

It wasn’t a typical day at the ranch in 1981 for John and Lucille Hogg in Meeteetse, Wyoming. The family dog was wandering the ranch and came back with a gift for his owners — a ferret. Despite having lived in the area all his life, John Hogg had never seen a ferret quite like this one. He and his son Allen brought the ferret carcass to a local taxidermist who identified it as a black-footed ferret. They then looped in wildlife authorities who found a small population of ferrets from a land survey. 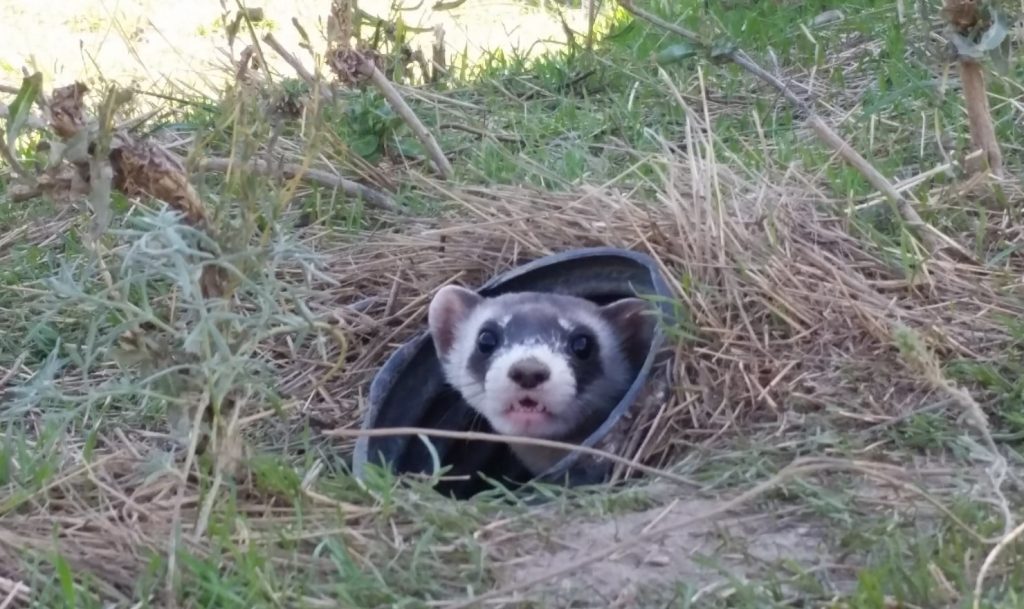 To learn more about the black-footed ferret and its conservation story, the Wild Kingdom crew visited Cheyenne Mountain Zoo in Colorado Springs, Colorado. This Association of Zoos and Aquarium accredited organization is one of five zoos partnering with the U.S. Fish and Wildlife Service in a breeding and reintroduction program. The zoos are working toward recovering the native black-footed ferret population. 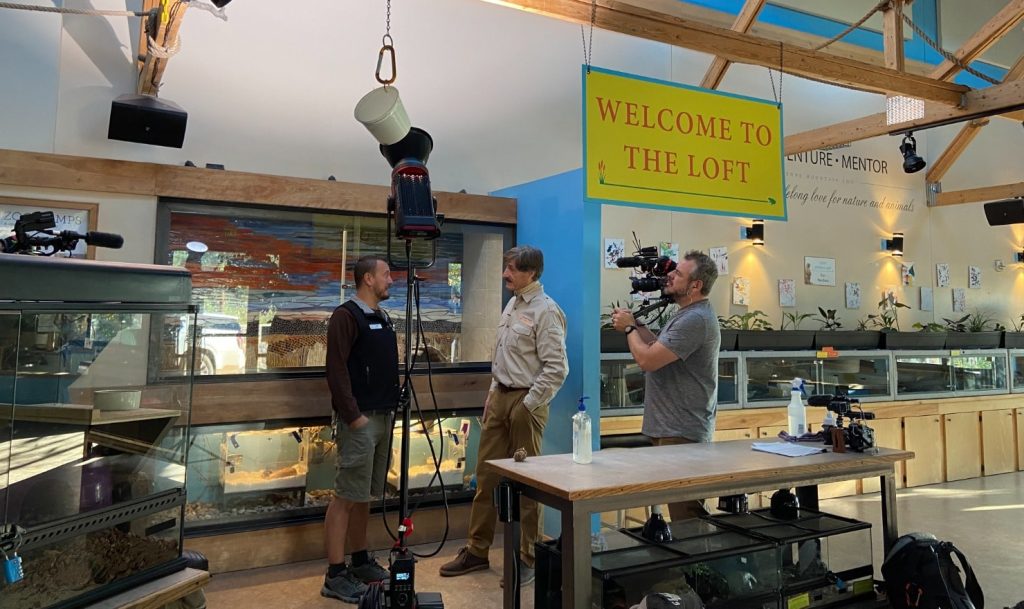 The trip to the zoo coincided with Black-Footed Ferret Rediscovery Day, celebrating 41 years since the remarkable day in Wyoming. At the zoo the crew learned about the teams work with the black-footed ferret program including meticulously controlled conditions to prepare for the animal’s annual breeding. Visitors at the zoo can see black-footed ferrets in The Loft, which is also home to black-footed ferret ambassador, Rouge. Rouge is a special part of Cheyenne Mountain Zoo, helping to educate visitors on the importance of conservation. 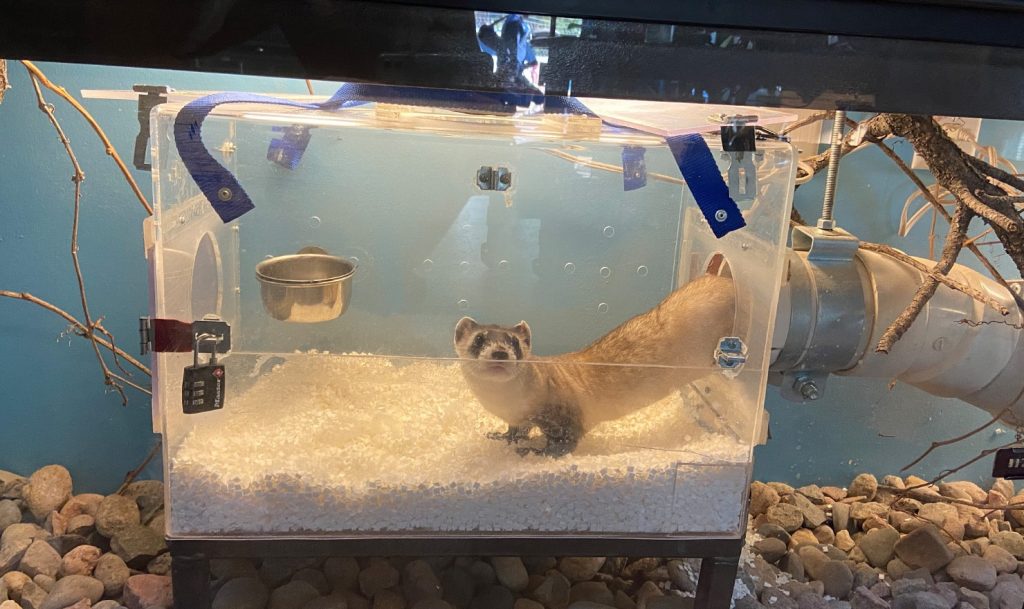 Next up was the National Black-footed Ferret Conservation Center in Fort Collins. There, the Wild Kingdom crew teamed up with episode Guest Host Jeff Ewelt, executive director of ZooMontana. Staff from the U.S. Fish and Wildlife Service also joined. 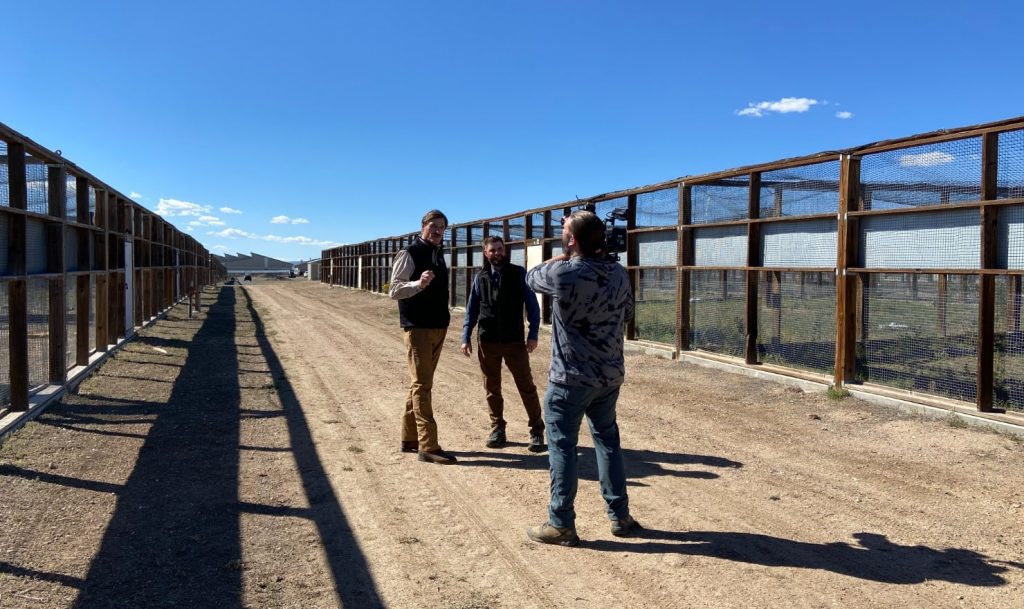 The National Black-footed Ferret Conservation Center is known for its work on recovery efforts, including dusting (vaccinating prairie dogs and ferrets), reproduction, captive breeding, husbandry, plague ecology, telemetry, artificial insemination, genetic diversity and cloning. In fact, the first-ever endangered species cloning occurred in 2020 when Elizabeth Ann, a black-footed ferret clone, was born. This was a huge step toward an increase in genetic diversity and disease resistance for the black-footed ferret — both issues that continue to impact them due their small population. 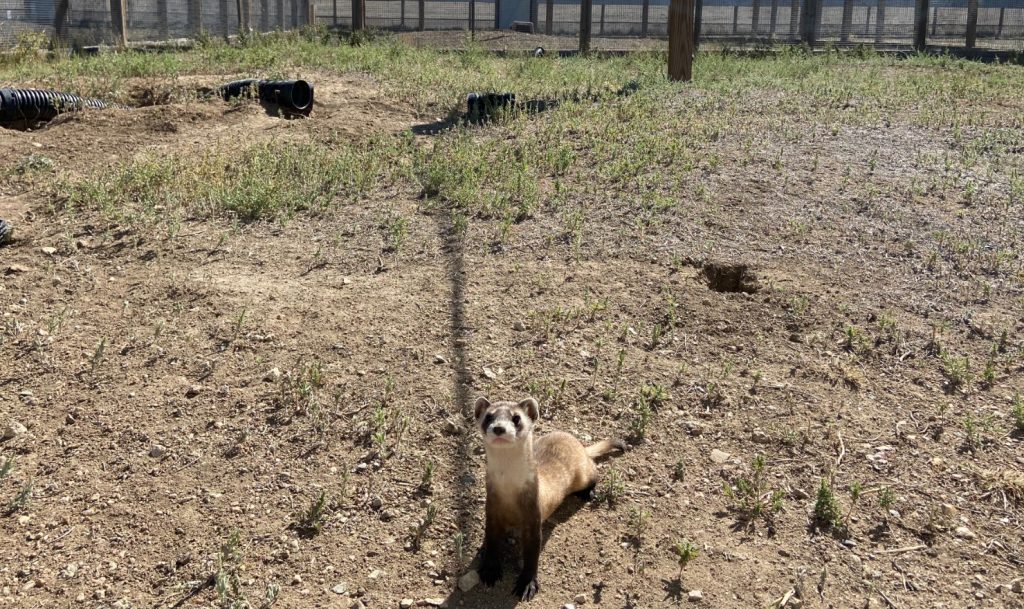 From 10 p.m. to 7 a.m., the Wild Kingdom crew took part in a black-footed ferret overnight survey also known as “spotlighting” at the Rocky Mountain Arsenal National Wildlife Refuge in Commerce City, Colorado. Multiple surveys take place in the fall, with the intent to capture, tag, chip and vaccinate as many ferrets as possible in one evening. This allows the U.S. Fish and Wildlife Service to keep tabs on the black-footed ferret population. It also ensures continual plague management to assist the population. The team witnessed a successful ferret spotlight (capture), and Wild Kingdom Host Peter Gros and Guest Host Jeff Ewelt viewed a chipping. 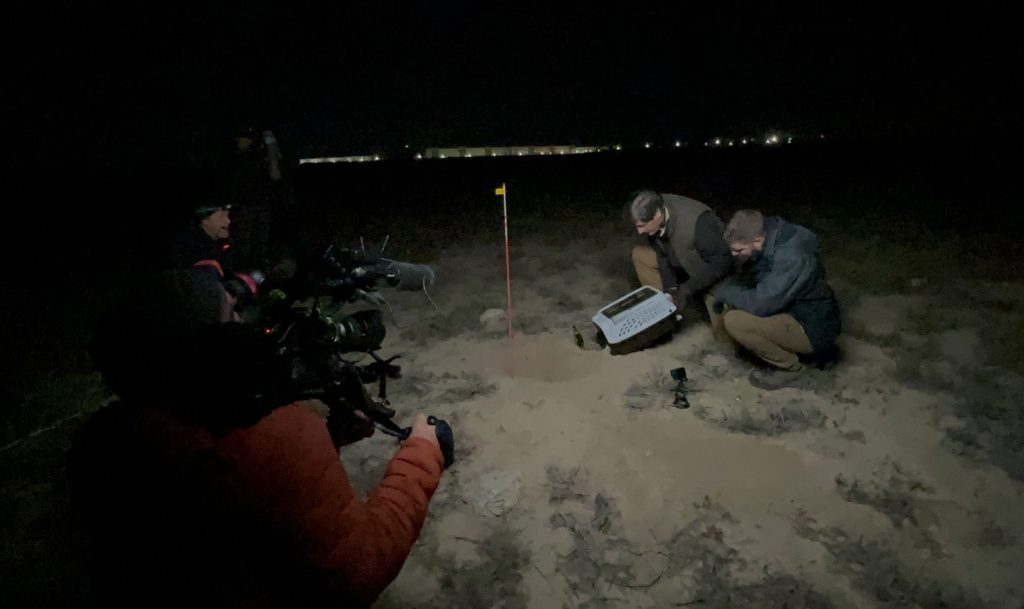 After a successful black-footed ferret spotlight, the crew traveled with the U.S. Fish and Wildlife Service back to where the ferret was rediscovered — Meeteese, Wyoming — for the 2022 black-footed ferret release. There, they met with Wyoming Game and Fish and other partners to release the preconditioned black-footed ferrets back to Pitchfork Ranch, cared for by Dr. Lenox Baker. 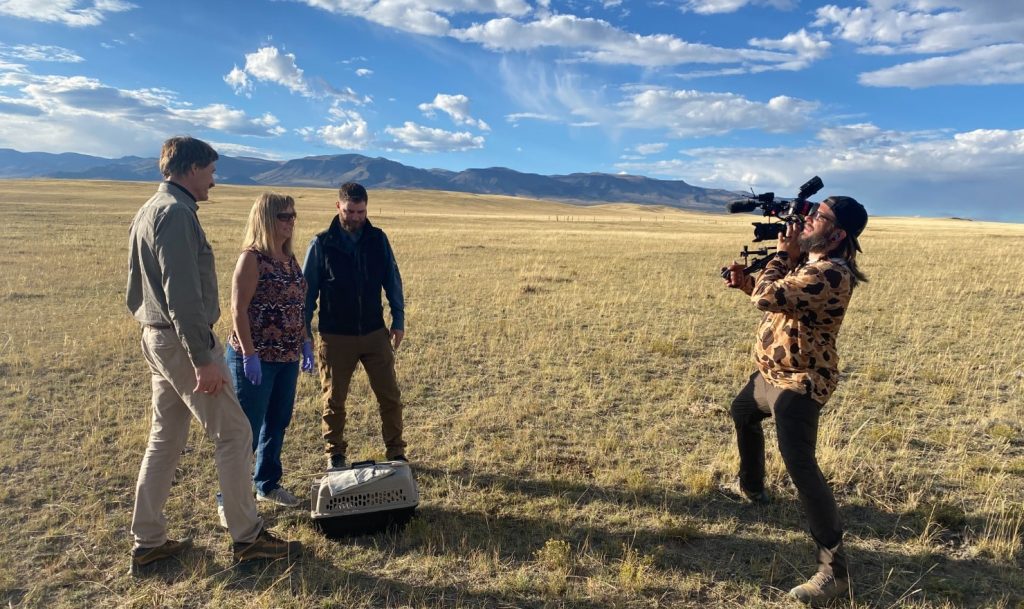 The following day, the team spent some time on the ranch now belonging to Kris and Allen Hogg, John and Lucille’s son and daughter-in-law. It was the Hogg family dog, Shep, that rediscovered the black-footed ferret all those years ago. The crew spent time with the Hoggs reminiscing about this essential find and heard firsthand about their family’s contributions to conservation. 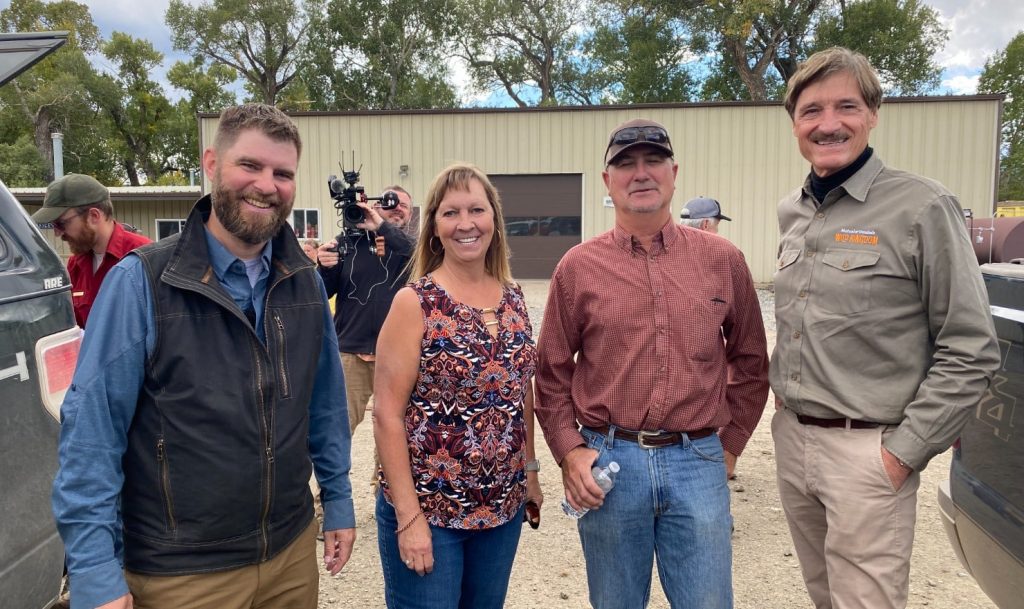 Through great partners, such as the U.S. Fish and Wildlife Service, Cheyenne Mountain Zoo and the National Black-footed Ferret Conservation Center, and people such as Dr. Lenox Baker and the Hogg family, research, awareness, reintroduction and even recovery of the black-footed ferret is possible. However, there are still obstacles to overcome including disease and habitat loss. Learn more about efforts surrounding the black-footed ferret’s recovery when “Ghost of the Prairie” premieres April 14.

For more inspiring stories of animal conservation, mark your calendar with the schedule of each episode of Mutual of Omaha’s Wild Kingdom Protecting the Wild.

Can’t wait till the series premiere in January? Read the story of the California condor, another animal brought back from the brink of extinction in the 1980s.