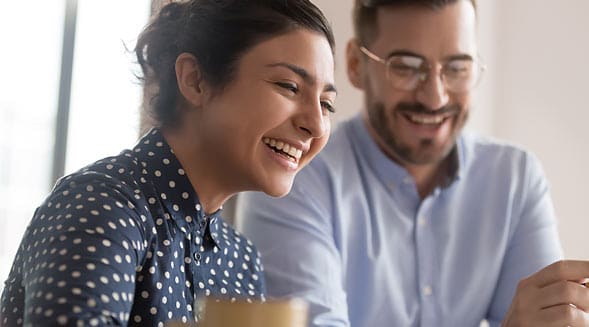 When Abby Jones and Scott Hickey talk about their work as engineers in Mutual of Omaha’s Information Services Operation, they frequently mention the fun they have solving interesting problems. They also talk about the personal and professional relationships they’ve forged while working on those problems.

Jones, who has been with Mutual for five years, found that her pre-hire expectations of Mutual differed greatly from reality.

“My initial thought was that Mutual was a very formal environment, that I would need to dress up for work every day, that the company was behind technically and everyone would have Windows computers,” she said. “Also, the thought of working in finance and insurance was not something I was passionate about.”

Then she had lunch with Hickey, who had been with the company as both a contractor and an employee for over a decade, and Jerry Sayre, Chief Software Engineer Officer. Their perspectives – that she would be helping customers protect what they care about, that Mutual has a supportive culture and that she would be serving others – convinced her to accept a position.

“Mutual wasn’t anything like I expected,” Jones said. “I was able to use a Mac and got to work with modern front-end frameworks. I worked with a group that was integrating JavaScript code into a continuous integration pipeline. Mutual was starting to use AWS [Amazon Web Services]. Things were very forward-focused.”

Jones was also impressed by the culture. What she had heard wasn’t just a recruiting tactic. She first began to realize this when she went to a funeral for a co-worker’s family member. “I was amazed at how many Mutual associates came to show support!”

Jones’ favorite assignments have involved learning new tech, figuring out how it works and how to integrate it. “Then I go show other people how to use it and we work through issues together. It’s super fun!”

Problems to solve and smart people are the two ingredients in Hickey’s favorite assignments.

“I worked on what was called a ‘quick wins’ project,” Hickey said. “There were eight of us in a conference room for a couple of months, figuring out ways to improve existing systems. It was fun to go into that room and do a mix of coaching and learning. Good people working together on big problems makes for a really memorable experience.”

The pace of change in tech and business continues to accelerate. Mutual of Omaha is two years into a multiyear initiative to modernize technology platforms and business processes.

“It’s exciting,” Hickey said. “We have a powerful private cloud – it’s amazing how quickly that enables us to move. We can come up with an idea for a web service this morning and have it running later today.”

Jones likens work on tech modernization to “dancing on a ball that keeps rolling.”

“We’re focused on bringing our business operations and IT closer together and creating a shorter feedback loop,” she said. “We’re building in automated testing and speeding up deployments to get things in front of the business areas very quickly.”

Exploring new tech platforms and tools is compelling, but the Information Services team has its eyes on a bigger prize.

“We need to be able to quickly build what our customers need,” said Jones.

“Problems are platform-agnostic,” Hickey added. “We want to build software that can survive the test of time and achieve our goals.”

In information technology, where the pace of change is potentially the biggest challenge, Jones and Hickey know it’s the culture at Mutual that drives success.

“We are on this journey together and we don’t leave people behind,” said Jones.

“Tech won’t be the same five years from now and we need to be humble about that,” added Hickey. “We’re building a learning culture and developing people who are passionate about software engineering. We have interesting problems to solve. It’s gonna be fun!”