If Marguerite Perkins Garrick’s name sounds familiar, it’s because she’s been a part of Mutual of Omaha’s Wild Kingdom family since birth. Her dad was the show’s original host, Marlin Perkins, and she’s carried on his legacy by working in conservation.

Growing Up with Mutual of Omaha’s Wild Kingdom

As a child, she remembers when her dad would come home from Wild Kingdom filming trips and her family would watch the show together on television. Even with Marlin safe at home, Marguerite recalls the thrill of Wild Kingdom getting to her family.

“There would be something like that famous anaconda show,” she said. “He was sitting right there, and we were thinking, ‘Oh gosh, oh gosh, it’s going to kill him.’” 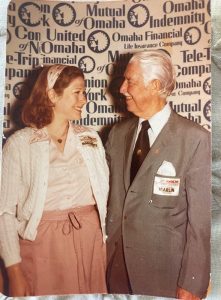 Today’s Wild Kingdom continues with the new series, Mutual of Omaha’s Wild Kingdom Protecting the Wild, hosted by Peter Gros. In Peter, Marguerite sees traits of her father, someone with a “gentle, enthusiastic quality for sharing the wonders of the natural world.”

“I think Peter Gros is the perfect choice to carry on his legacy of sharing great conservation stories that will give people hope, make them care and make them think,” Marguerite said. “In the coming years, I know Peter and the new Wild Kingdom team will also inspire generations of young people to become engaged in wildlife conservation work.”

Throughout her life, Marguerite has seen the great impact that Wild Kingdom has made on so many people.

“All my life, conservationists, veterinarians, zoologists, field biologists and people who have been moved to volunteer and support wildlife organizations have told me my dad and Wild Kingdom were their inspiration to want to work with and conserve animals,” Marguerite said.

In 1971, Marlin and his wife, Carol, founded the Endangered Wolf Center in Eureaka, Missouri, The center is a leading conservation organization for endangered wolves, foxes and African painted dogs and is featured in the upcoming Mutual of Omaha’s Wild Kingdom Protecting the Wild episode, “Tale of the Red Wolf.” One way Marguerite continues her parent’s legacy today is by staying involved with the great work at the center.

Another heartwarming reminder of her dad’s legacy happened earlier this year while Marguerite was on a safari in Kenya with Anthony, someone she’s known since her childhood. His father used to drive for the Perkins’ safaris, and now Anthony took over the safari business.

“I had a group of people with me who started talking about trophy hunting and the fact that there’s no hunting in Kenya,” Marguerite said.

“Original safaris had been hunting safaris and it wasn’t until the 1960s that photographic safaris became popular. Anthony turned to me and said, ‘Your Dad was hugely influential in fact instrumental in making photographic safaris popular!’ I teared up and said, ‘Really?’ He said ‘Yes, because of his international popularity through Wild Kingdom, he taught people to love wild animals and to enjoy watching wildlife in the wild rather than wanting to shoot them.”

Sixty years after its debut, Mutual of Omaha’s Wild Kingdom continues to make a positive impact for wildlife conservation and inspires the next generation of conservationists.

“I am so excited that Wild Kingdom is returning! By sponsoring this program beginning in 1963 with my father, Marlin Perkins, Mutual of Omaha‘s commitment to wildlife conservation and habitat protection has been the source of entertainment, learning and inspiration to generations of children and adults,” Marguerite said.

“Thank you to Mutual of Omaha for continuing all these years as part of the fabric of its company’s culture, not only to care about protecting wildlife and wild places, but for its renewed commitment to tell their important stories.”

Think Jim Fowler was the only one wrestling big snakes? Check out this video of Marlin Perkins getting his hands dirty as he attempts to capture an anaconda. Do you know what happens?