Behind the Scenes of the Wolves Episode | Protecting the Wild

The wolves episode for our new series, Protecting the Wild, led us to two locations, North Carolina and St. Louis. There, we learned about Mexican and red wolf conservation to visit a place special to Wild Kingdom history. Read more about our travels and who we worked with, and get a sneak peek of the full episode, airing in January 2023.

Looking for more exclusive behind the scenes content? Check out these other sneak peeks.

Wild red wolves have drastically declined in population in the last decade, from around 130 to only 15 now in the wild. These 15 red wolves all live in North Carolina, and the Wild Kingdom crew traveled to Alligator River Wildlife Refuge in East Lake, North Carolina to learn more. Our team was guided by Joe Madison, program manager of the Red Wolf Recovery Program and Jennifer Koches of U.S. Fish and Wildlife Service. 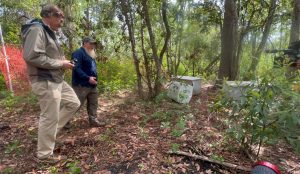 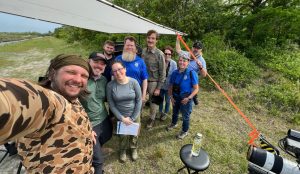 In North Carolina, our team learned that the fairytale image of the big, bad wolf couldn’t be further than the truth. Wolves are highly intelligent animals. They are caring, playful and devoted to family. Wolves live in family groups, where they care of their injured and educate their young.

The red wolf population has dwindled largely due to hunting and traffic fatalities. To help aide in conservation, the Red Wolf Recovery Program team put bright orange radio collars on the wolves. These collars help make people aware that the wolves are highly endangered, and are not coyotes, which are commonly hunted.

In addition, telemetry devices are being used to track the wolves. We were able to use these devices to track a young female wolf who was out hunting for food for her new litter of pups — the first litter born in the wild in four years! (Check out our announcement on Facebook.)

The highlight of the North Carolina trip was capturing a red wolf on film. Be sure to tune into the episode to see one of the rare red wolves. 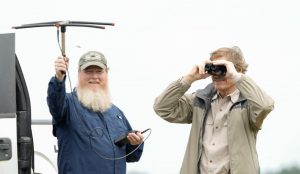 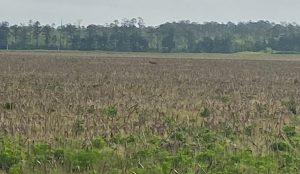 While at the center, we spoke to Regina Mossotti, director of animal care and conservation, and Marguerite Garrick, Marlin Perkins’ daughter. Mossotti shared the center’s mission, to reproduce and release canids (the family of mammals that the wolf belongs to) back into the wild. They’re able to save these animals through research, awareness and reintroduction into the wild. The center also greatly focuses on educational programming to correct the myth of the “big, bad wolf.” 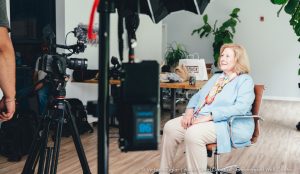 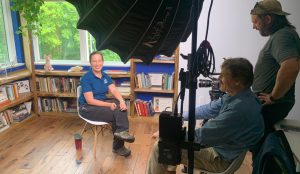 First up were the African painted dogs. Peter prepared melons for an enrichment activity, adding sardines, mice, rats, deer meat and a variety of spices. This diet is very similar to what they would eat in the wild. Peter then placed the melons in the African painted dogs enclosure and watched as the dogs interacted with the food and each other, showing the hierarchy within the litter.

Next, the Wild Kingdom crew monitored from a blind as wolves fed on a frozen deer carcass – a refreshing summer treat on a hot day! Wolves are naturally afraid of humans. The center limits human interaction as much as possible to maintain this fear so when the wolves are released back into the wild, they’ll stay away from humans. This helps to ensure their survival in the wild. 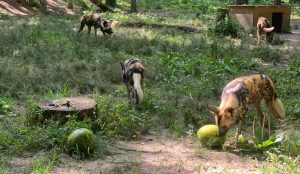 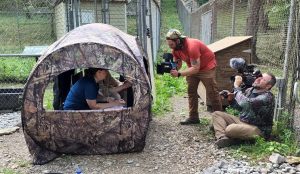 Perhaps the cutest part of the episode will be the footage of five newborn red wolf pups. Peter participated in checkups where the wolf pups received vaccines and were sexed and microchipped. Peter and the center’s team kept the interaction fast. This is the first time the wolf pups interacted with humans. 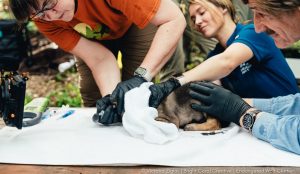 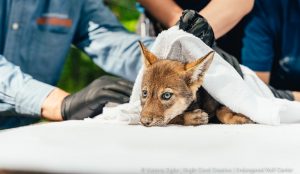 Learn more about wolves in the full episode, premiering in January 2023 on RFD-TV and digital channels. And for more sneak peeks into Protecting the Wild, check out these other behind the scenes looks.